skip to main | skip to sidebar

That was an unexpected break!
I really had no intention of taking a blogging break but life with the kids has just taken over really and in a nice way too.
Because of this I haven't even been crafting!
The sewing machine has got some dust on it, the hinges of my craft trunk are all squeaky and I'm at a loss as to what to do next.
Well I tell a small lie, I made a bracelet yesterday. A very quick smokey quartz and silver bead bracelet which was a retirement gift.
I am still crocheting too. I've been making lots of hexagons for blanket but typically I have run out of wool for the outer part of the hexagon and now I can't seem to source anymore!
It will just have to be a multicolour hexagon blanket instead.
I'll try and be a bit better on the blogging side of things again. I bet I have missed some good swaps and other crafty goodness, so I'll be checking in with all my favourite blogs over the next few days.
Bye for now!
Posted by Chloe at 09:16 No comments:

I'm lucky I can type

Its been a while since I last posted but I have good excuses.
Too busy making stuff and thats the best excuse I think.

The crocheting has been coming on leaps and bounds. I've now made a small blanket for M's teddy, one for E's stinky bunny and one for a friends little girl.
Here 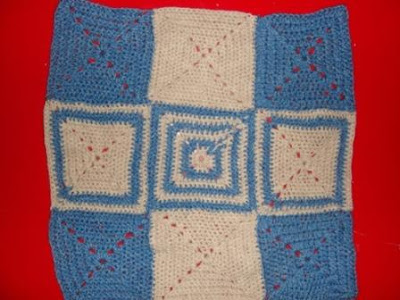 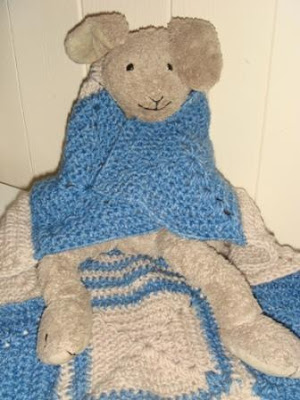 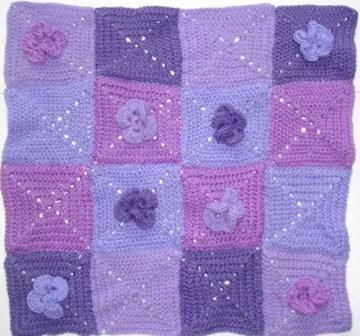 The one above was done in 3 days. My friend said I should make something for her little girl rather than buy, so in my stupid wisdom I thought I would do a blanket.

My wrists and fingers are now paying the price. They ache, as do my shoulders and neck. Don't get me wrong, I loved making it and I am really enjoying this whole crochet lark, its a great way to wind down at the end of the day but doing something like this in such a small timeframe makes it a hellish nightmare.

I do love it though.

Other than that its just been normal half term madness here and I am so ready for them to go back on Tuesday. Theres only so much entertaining you can do for 3 kids under 5!

I'm now starting on another blanket for M. She picked the colours she wanted, not only that, she picked the most expensive wool there was in the shop. Not happy with the DK selection at £1.09 a ball, no we had to have the £3 balls.

So the next blog post will hopefully be an update of how its going or even a completed blanket! Right I am going now because my hands can't type anymore.

Mee on Etsy too!

Why mess about?
Next week I'll be taking over the world.
Posted by Chloe at 13:04 3 comments:

Mee has landed on Folksy 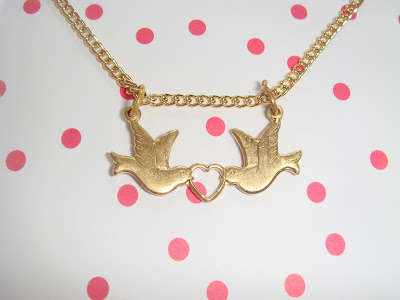 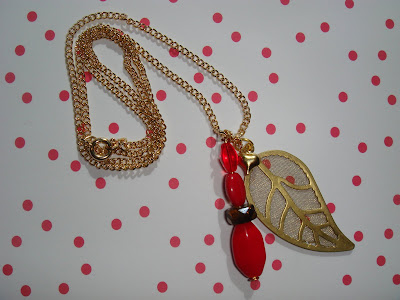 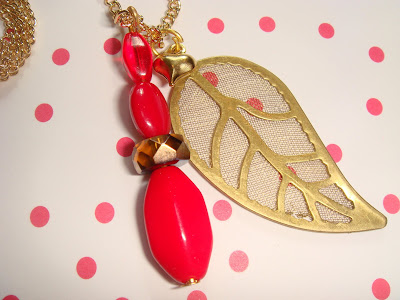 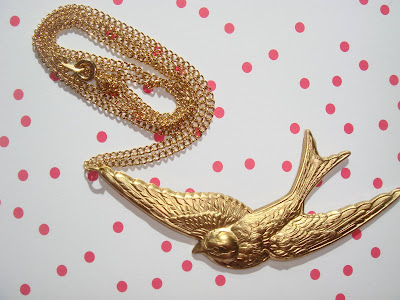 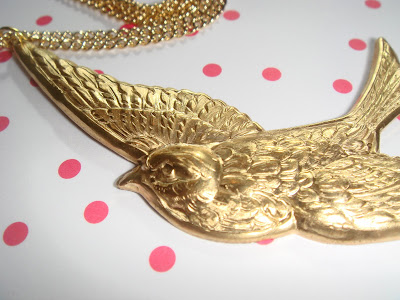 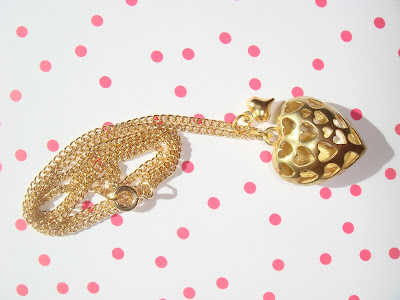 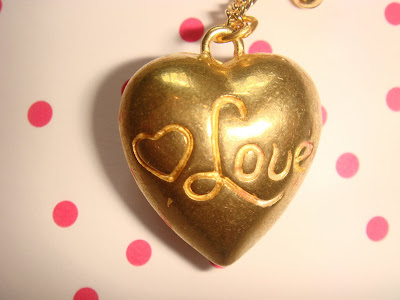 Finally
Mee is on Folksy!
These are all vintage pendants and you can find them here
http://www.folksy.com/shops/MeeCrafts
Posted by Chloe at 05:18 2 comments:

I've decided that I work much better actually being shown how to do something rather than reading about it.
I've also just realised why I probably did so badly at school.
Never mind. 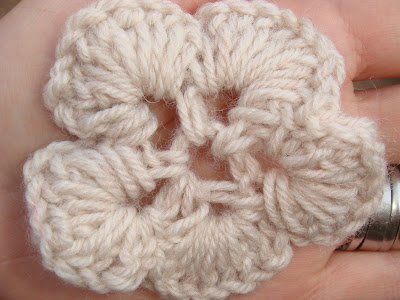 I managed to do this flower just watching a youtube video.
It took me a few attempts. I got the general gist of it but there were a couple of bits where you couldn't see where you had to go next etc.
But I am pleased I've finally cracked it. Now I just want to know how to make a bigger version. I'd like to layer them and possibly make some brooches or corsages with them. I've tried doubling the amount of stitches but it doesn't seem to work out.
I will keep trying though!
I was very lucky to have been sent this crochet book (along with some Green and Blacks but I've no evidence of that anymore). 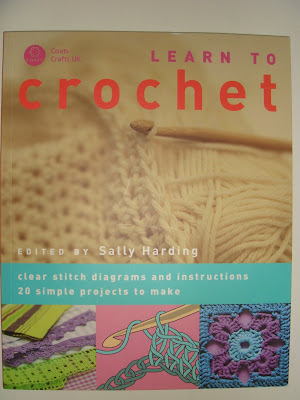 Its by Coats so there are some great little and big projects in there.
I'd like to have a go at the baby blanket but I can't get my head around the pattern instructions. I know the lingo and theres even a reference if I get stuck but its the amount of stitches that confuse me.
Is it possible to just be able to dive into a project like that as a new crocheter? I know the stitches now but even so, it doesnt make it any easier.
Any tips would be greatly appreciated.
I also have another trick up my sleeve. I'm awaiting the arrival of some lurrrvely brass vintage pendants and charms. The plan is to make a variety of necklaces, maybe even bracelets.
I've been wanting to do this for a while now but I've never got round to it, plus vintage pieces are so so popular its hard to get hold of them. Just have a look on ebay. Once upon a time you could grab a job lot of charms and pendants for next to nothing, now your lucky if yor paying under £50.
But I have sourced a marvellous website which has the most fantastic items. I spent ages looking through the whole shop! I didn't leave a page unturned. Its rather addictive.
If you have a look to the right hand side on my list of blogs, the shops blog is on there. They are called "My Vintage Charms".
On the downside of things, my mum was admitted to hospital yesterday. She has been unwell for over a year now, suffering terribly with Rhumetoid Arthritis. The last two days she has been having palpatations so as a result she is now laying in a smelly hospital on a monitor and is thoroughly miserable.
I feel bad because I'm stuck 30 miles away but I am hoping its nothing and just a case of them altering her medication.
Hopefully they will get the readings they need and she will be back at home by Monday with their mad cat.
In the meantime I am off to enjoy the sun and spend a mad evening with the mad mums from school.
Have a great weekend folks!

My crochet blanket is here!
I have been sooooo looking forward to this, bearing in mind I trusted the colours with my dear old Nan. I asked for pinks and purples
and this is what I got......... 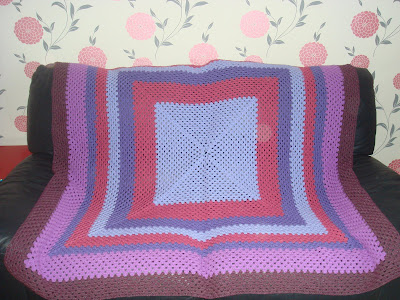 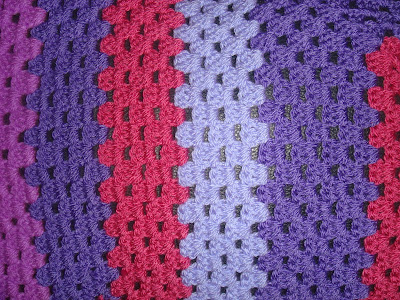 I have crochet envy

Can you believe that this was made by an 86 year old lady who suffers terribly with arthritis!Apparently crocheting actually helps her joints. So with any luck her making this for me has made her feel alot better! 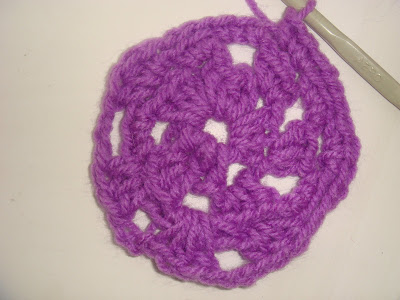 Better than a triangle isn't it! The only thing is that my mum started it off and I continued it once she showed me what I was doing. So I have to now try and start it myself and see if I can get the same result.

Just out of interest for those who crochet, do you do it loosely or quite tight? I'd not realised that I do mine pretty tight and if you look on the picture, you will see that my crocheting is more to the right side and my mums to the left. I was using a plastic hook and different wool so it might have something to do with that, but I had never even thought about how I was actually crocheting.

I'm off to experiment!

I can now show you what I sent for the Owl swap.
Silly arse over here forgot to take pictures but Hannah my swap buddy has recieved it and blogged it now so I've pinched the photo (hope you don't mind Hannah!) 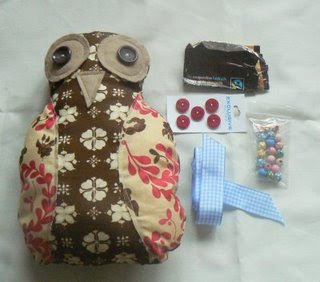 I loved making that Owl. You know when you have an idea in your head but your not sure whether its going to come out as you intended? Well this did.

I'd like to make some more but with different colours.

Alex commented on my last post and asked how the crocheting was going.

Well I am still doing the chain stitch and turning but once again I have found what I thought was a straight piece, turning into another triangle! And whats worse is that I can't figure out what I am doing wrong. I need someone to show me in person what I am doing and how to rectify the mistakes. I decided then to try and have a go at making a flower. I have watched dozens of you tube clips and thought I had it pretty much sussed in my head. How wrong was I.

In the end I had something that could have been a finger part off a glove. I suppose I should be pleased with that but a flower it was not.

I have my mum coming on Thursday and hopefully she's going to show me some tricks and I might crack the triangle problem! 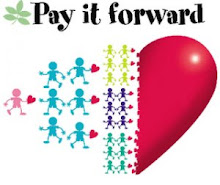 Blogs of the non craft variety

Where are you from?

Chloe
North Yorkshire
My name is Chloe and I'm married with 3 children and living in North Yorkshire. I have a bit of a weakness for fabric!